The History of Ananda Cottages 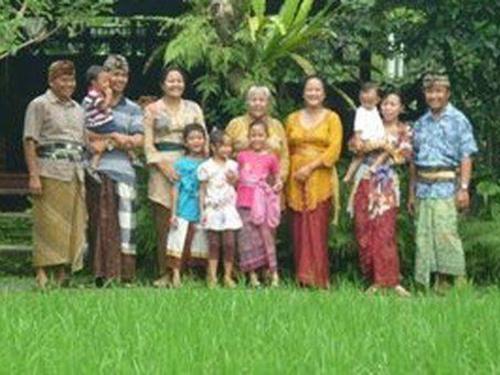 In the 11th century, the great Hindu priest Markandya Rsi, was on pilgrimage from Ubud to the great Mother Temple of Bersakih, on Mount Agung. On the way he noted some sacred places and one of these was the holy hill where Ananda Cottages now stand, a happy and holy place. Ananda means Bliss in the ancient Sanskrit language.

In 1972 I Wayan Pageh, the owner of Ananda Cottages, built a home here for his wife Nyoman Suryani. He was then an assistant to the King of Ubud, as his ancestors before him. Nyoman was the local midwife. Later they built the family temple and the first guest rooms in the family compound, as friends visiting Ubud needed somewhere to stay.
From this Ananda Cottages grew over the decades to the family hotel it is now. New bungalows have been added through the gardens and the rice paddies, with halls for Yoga retreats and pools. There are now 3 generations of Wayan's family at Ananda Cottages. His children Wayan ,Dewi and Yani have taken over the day to day running of the hotel, with Wayan and Nyoman looking after their 7 grandchildren.